This a great question that I’ve seen come up a lot. Many self-taught developers start with the basics of HTML, CSS, and JavaScript (myself included) and this can be enough to land you a job as long as you have a solid portfolio to back up these skills. However, the market is beginning to be a lot more demanding. 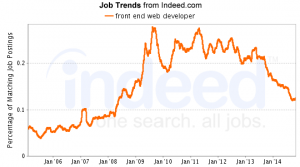 As you can see from the graph above, demand for Front End Developers peaked from around 2009-2012 before going into a steady decline. As web technologies improved and front-end frameworks such as Bootstrap and Foundation became popular, this made creating a passable front-end without advanced knowledge of HTML and CSS much easier. The days of finding a job only requiring HTML and CSS came to an end. Employers began to pass off front-end duties to back-end developers, which created the current “full-stack” developer market.

Fortunately, there is still some hope if you want to stay away from back-end development. Many companies are willing to hire front-end developers that also bring design skills to the table. For instance, a graphic designer familiar with Photoshop and Adobe Illustrator along with front-end development skills can be a great asset to any company.

In conclusion, there is still some value in a front end developer career path. But you will most likely need to pair the old standard of HTML, CSS, and JavaScript with another skill such as Design or Digital Marketing/Copywriting to be successful in this market.